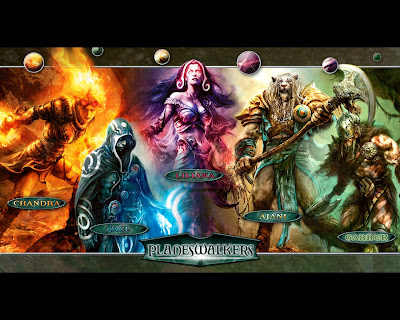 Owen and I are playing Magic the Gathering frequently these days. You see, I think it's a very educational game from a mathematical/game-theory perspective, and I want to teach Owen, um---you know what? Screw that. I don't need to explain myself. Owen and I think MtG rules!

Whew! There. I'm out of the closet :) Yes, I'm raising a nerd. An attractive, athletic, socially intelligent nerd and this is how we bond.

I won't bore you with the details of the gameplay other than to say players take turns playing cards that do things such as creating new types of creatures than can inflict damage on their opponent. I thought it would be fun to review a recent rules-dispute between Owen, as viewed through the through the lens of statutory law, inspired by my many discussions with my lawyer brother-in-law. I also like to talk about law with Law Dawg, who is a frequent contributor to this blog. 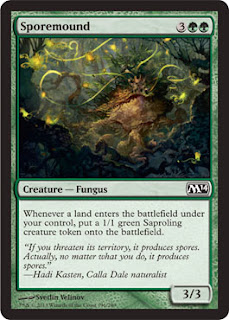 The dispute started when I played a Sporemound, which states "Whenever a land enters the battlefield under your control, put a 1/1 green Saproling creature token onto the battlefield." Basically, if I put out a "land" card (see image below), I get a new creature, a Saproling (pictured above) that can battle Owen and put him at a disadvantage. I then "activated" this ability by playing a land and a corresponding 1/1 Saproling creature. 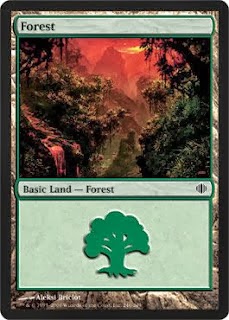 Owen objected strenuously on the grounds that I had not been granted the ability to put a land out. I argued that the language of the card implied that I had such an ability at any time ("Whenever a land enters the battle field under your control.") In my view, the card implied that playing a land was  normal part of the game, and that Sporemound activated it's special ability whenever this mundane land-playing took place.

But Owen insisted that I had to have a separate card that granted me the ability to put out a land, which could then be counted toward the Saproling. 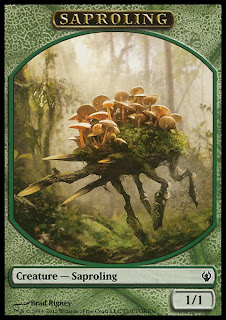 We took the case to the Court of Mom (Erin), who ruled in my favor initially. But upon appeal, the Judge put the original ruling on hold pending more information. We were instructed by Her Honor to look up further details on the rules on the online Magic website. Her interpretation of the extended description would be final.

We found this entry in MtG website description of the Sporemound, based on prior rulings on the use of the card dating July 1, 2013:
Note that Owen was, in fact, correct. Sporemound's ability triggers when a card grants the player the right to put a land into the battlefield under their control. But it also allows the player to trigger the ability whenever a land is played under normal circumstances, even when unprompted by another card.

The high court ruled in favor of Dad, while noting that the full interpretation of the actual law involves both my and Owen's individual interpretations.

Law Dawg provides some background regarding statutory law (first three paragraphs below), and then comments on this specific decision:

Under both federal rules of statutory interpretation and the rules of every state in the country that I am aware of, the primary goal in interpreting any statute is to discern the intent of the rule makers. If the language of the rule is plain and unambiguous then you resolve disputes by reading the rule and applying its plain language as it is  drafted. The policy behind this is that the language of the rules are the best indicator of what the rule makers intended.


In deciphering plain language, of the most relevant rules to your dispute with Owen (as I will explain below) is that a statute must be read to give effect to all of its provisions so that no portion of a law is rendered a nullify. Only if the language is ambiguous do you turn to items other than the language to discern what the rule makers intended. These include referring to things like legislative history (what did the rule makers say about the provision when they were debating the rule), whether a particular interpretation of the rule would violate the constitution, and other so-called canons of construction.

Now if we look at the specific rule that you and Owen are disputing, I think we can say that the language in the rule you copied in your message is plain and unambiguous. It states that: "Sporemound’s ability triggers whenever you play a land and also whenever a land enters the battlefield under your control for some other reason, such as the ability of Into the Wilds."

The rule pretty clearly states that there are two ways to trigger Sporemound's ability: (1) whenever a land is played; and (2) whenever a land enters a battlefield you control FOR SOME OTHER REASON. The plain language states that the ability is triggered by (1) "and also" (2). It cannot mean that only (1) or (2) is capable of triggering Sporemound's ability. To read the rule the way Owen suggests would violate the principle that rules must be read to give effect to all provisions because it would render (1) a nullity. The Court of Mom got this one right because Erin's ruling applies the plain language of the rule while giving effect to all its provisions.

That's it in a nutshell. Feel free to bring me future questions of this nature for my comment, whether they deal with Magic the Gathering, or household rules and the creative ways Owen tries to circumvent them.

Unknown said…
+1 for nerdery! My daughter loves board/card games as well (simpler ones though, she's 4), it's a great way to bond and teach math / logical / strategic thinking. Have you tried german-style games?

PS Do your kids like astronomy? Have you taken them stargazing? Another great nerdy way to bond!
October 11, 2013 at 2:42 PM