By John Johnson October 14, 2013
Owen and I will be counting down to the 2013-2014 NBA season by giving our list of top-10 most valuable/exciting players. We put together a Google Docs spreadsheet and listed our combined favorite 20 players, and ranked them in order of how much we're looking forward to watching them play this season, together with how valuable we feel they are to their team. 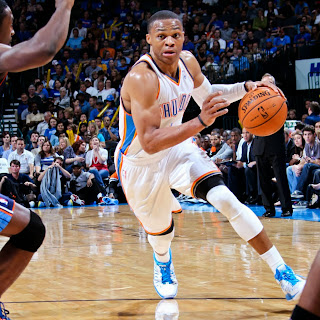 Number 10 in our Top-10 is Russell Westbrook of the Oklahoma City Thunder. The 6-foot-3 guard hails from UCLA and represents the new mutant breed of scoring point guards that are common in the league today. Often criticized for taking too many shots, he averaged 7.4 assists per game last season, while scoring 23.2 points per. I say if your point guard is dishing out 7 assists a game and scoring like that, let him shoot too much!