Intelligence in Astronomy: What You Think and Why It Matters

By John Johnson December 01, 2013
In astronomy we are acutely aware of the importance of intelligence for success in science. Last week I posted a poll to gauge the opinions on intelligence of the readers of this blog, and most of you are current or former astronomers/physicist or other scientists, or know astronomers/physicists or other scientists. The first question (statement): 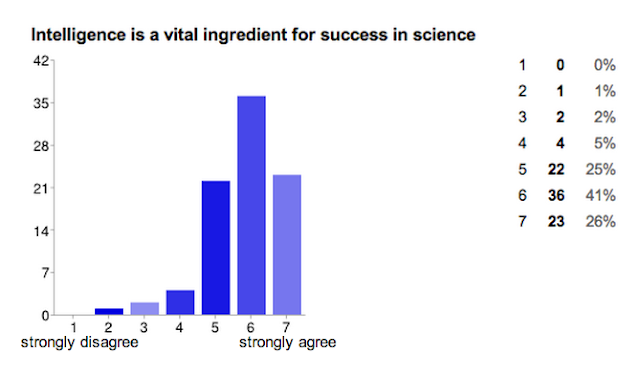 The vast majority of you strongly agree with the notion that intelligence is important for success in science. But what do I mean by intelligence? That's a hugely important question, but I left the definition out of this question for a reason. Back to this in a bit.

This is rather remarkable to me. However you readers define intelligence, the majority of you feel that it is a mutable quality of an individual. More specifically, you all feel that it is something that is not a fixed trait. Can it increase in time?

So what's up with these questions? Well, it turns out that these questions are key diagnostics of what psychologist Carol Dweck and collaborators call "mindset." In their extensive studies over the past 30 years they have found that humans exhibit two broad classes of mindset: fixed and growth-oriented (see  Dweck's highly accessible book Mindset, and/or Dweck, Chiu & Hong 1995).

People with a fixed mindset believe, either implicitly or explicitly, that the qualities of a person are fixed, perhaps even at birth, and these traits do not change appreciably over time. The other mindset is focused on growth. Growth-oriented people see intelligence as a malleable property of a person, and more importantly that it can increase in time.

It is important to note that there are plenty of examples of successful scientists with both types of mindsets. Fixed and Growth minded individuals are hired into faculty positions at top institutions, win grants, garner awards and attain success measured by numerous metrics.

However, the two mindsets lead to stark differences in
In the posts to come, I'll delve into issues related to mindset and intelligence. Next up: what do we mean by "intelligence?"