Intelligence: Nature or Nurture? Both, together!

By John Johnson November 12, 2013
Lately, I've become obsessed with understanding a fundamental problem in astronomy. We're all familiar with this problem, yet I've found very few good answers among my conversations with astronomers. I've found many clues, plenty of leads, but no fundamental understanding. For better answers, I have decided that I need to turn to psychology. But I digress. What's the question?! I'm interested in the nature of intelligence, and the role intelligence plays in success, particularly in the realm of astrophysics. More specifically: why do some students excel while others struggle, when all of them look about the same when we admit them? (And: is this even a well-posed question?!) 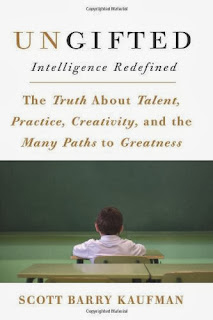 I'm currently reading Ungifted: Intelligence Redefined by Scott Barry Kaufman. The book is absolutely fascinating. I'm very much looking forward to meeting him in person during an upcoming trip to NYC (he's a prof at NYU).

I'm on chapter 3, but today I felt compelled to reread chapter 1, where I found my head spinning with what psychology has to say about the question of nature vs. nurture in the development of intelligence in people. It turns out that nature (genetics) and nurture (environment) work hand-in-hand to shape intelligence, talent and academic achievement at the highest levels.

Most people sense, properly, that there is a strong genetic component to talent. After all, many human traits are inherited. My quiet, soft-spoken friends often had quiet, soft-spoken parents. Athletic people often have athletic parents. Since mental abilities are traits just like speaking style or athleticism, shouldn't they, too, be heritable? My sons both show interest in many of the things I was interested in growing up, such as ninjas, fighter jets, math, Legos, cards and board games. So it seems pretty obvious that they'll succeed in academia just like their dad, right? (what do you mean that you don't see the connection between ninjas and astronomy?!)

Indeed, psychological studies show that mental traits are heritable, passed from parents down to subsequent generations. But as Kaufman points out, "Just because a trait is heritable (and virtually all of our psychological traits are heritable) doesn't necessarily mean that the trait is fixed or can't be developed." After all, my father is a musician and my mother is an artist, and I've never been particularly talented at singing or drawing. (In fact, one of my strongest, unreasonable fears is that my car is bugged. I comfort myself in knowing that no one could stay on the line very long listening to me singing along with Kimbra.)

Psychology research has also shown that genes only form the raw materials for the development of traits, and that specific traits such as intelligence, and even height, cannot be reliably traced to a single gene. Saying that traits are the result of genetics is like saying that babies are the result of mating. Both statements are true, but they're also too simplistic to be useful. There's a long path between the genes present in a person and the development of psychological traits.

The genes responsible for intelligence and talent are manifold, and the mechanisms by which these genes are expressed are intimately tied to environment. Environment broadly refers to external factors such as parenting and schooling, but also internal factors such as nerve impulses, hormones and even other genes. When we go through our lives, we have experiences related to our environment. The responses we have to environmental factors feed back on our genes, causing them to change the way that they are expressed, in real time!

We don't grow up to become who we are, never to change. Kaufman quotes science writer Matt Ridley who states very eloquently, "[Genes] are devices for extracting information from the environment. Every minute, every second, the pattern of genes being expressed in your brain changes, often in direct or indirect response to events outside [and inside] the body. Genes are the mechanisms of experience." (emphasis mine)

HFS! This is not the picture I started with. I think I carried around the implicit belief that, sure, kids develop while they're growing up. But once they reach adulthood, things are pretty much cemented in place. Right? We are who we are, we do what we do. But all I had to do was examine my own academic trajectory to disprove this notion. I started off interested in aerospace engineering. But after a year of classes, I switched my major to mechanical engineering. My grades dropped along with my interest in the subject. Then a charismatic physics teacher took me under his wing and I became a physicist. But upon graduation, I switched fields again to astronomy.

I was responding to the environment around me, but more precisely, my genes were expressing themselves in response to my experiences. Once expressed, new neural pathways were forged in my brain. Quoth Prof. Kaufman:


Genes are like the players in the Philadelphia Orchestra. There are many different sections responsible for contributing to the development of different traits. For the symphony to sound beautiful, lots of syncing is required...Not only that, but if the orchestra plays in a totally unresponsive environment...the players will be discouraged from reaching higher and higher levels of achievement. What's the role of the conductor in the gene symphony orchestra? The conductor is analogous to all of the environmental influences that can guide the various sections and help them sync up and sound beautiful.

I'm the son of a musician/theologian father and an artist mother. I never looked through a telescope until he was 21 years old, yet I grew up to be a professor of astrophysics at Harvard. Sure, I was born with the genes that predisposed me to enjoy math, science, and experimentation. I inherited my mother's keen eye for detail and my father's wit and communication skills. But only through the shaping forces in the environment around me were the myriad genes able to sync up, express in just the right pattern, and result in a symphony of astrophysical nerdom!