Thoughts, Take 2: On The Struggle

By John Johnson October 06, 2015
This is the second part of a haphazardly organized series of responses to Ta-Nahesi Coates' book Between the World and Me. The first part can be found here.

I was recently at a discussion about racism held in one of Harvard's dorms, Currier House, as part of their Currier Conversation series. As the honored guest and moderator of the discussion, I decided to have the participants break into groups of 2-4 and define some seemingly simple words before we had a proper dialog:

After the audience discussed for 5-10 minutes, I had them speak out about their definitions, thoughts and questions while I recorded their responses on a large paper pad mounted on a tripod. The self-selected group of attendees were well versed in the notions of race as a social construct; racism as the melding of prejudice and power; power as the ability of a social group to shape the choices and outcomes of other groups; and social justice as the simple notion that every human should have the same social, economic and political opportunities, even while they currently do not in our country. I was speaking to the choir, but it was a good discussion nonetheless. 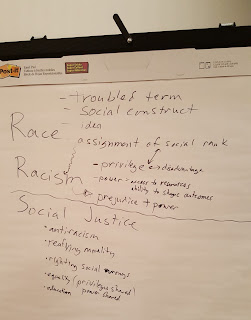 It was the sort of conversation that would no doubt cause Harvard's founders, those well-rounded captains of industry who harnessed the power of the American slave economy to amass great wealth, pass it to their children's children, and have buildings named after them, to squirm in their well-appointed graves. It was the sort of evening that also likely made many of the white attendees feel like the moral arc of the universe was, indeed, bending toward justice. However, this participant was under no such illusions, nor were the sisters and brothers with whom I spoke after the room emptied out.

The final question of the evening was offered by the house "master" (a title that needs to be placed on the trash heap of history) who asked me and another guest, "Here you are, two successful African Americans from different generations speaking to the same issues. Do you see progress toward and hope for the future with regards to race in this country?" My fellow guest said, and I paraphrase, "No." My answer was not dissimilar, even if I remember it in greater detail.

I responded that I recall living in Torrance, CA, just south of downtown Los Angeles in the wake of the trial of four white police officers who savagely beat Rodney King, a Black man, an event captured on video and forever seared into my memory. The jury, which comprised not a single Black American, had ruled that the cops were all innocent of wrongdoing.

I recall the sickness in my stomach, the disorienting feeling of "WTF?!" racing through my 15-year-old mind that was conditioned and trained to expect that justice was the norm thanks to the Civil Rights Act, and that injustice as a thing relegated to the distant past when white men with crew cuts wore sheets and burned crosses. I remember the days off of school as LA burned, seeing the smoke on the skyline from my house while talking on the phone with the few Black friends I had at my school. "Let it burn," we said in our frustration. I remember the police cruisers and their spotlights rolling slowly through my neighborhood enforcing the 10pm curfew. I recall the sadness on my father's face.
I went on to recall feeling similar sensations as I read my news feed the day that George Zimmerman was acquitted of wrongdoing in the destruction of Trayvon Martin's body. I remembered my rage the evening that the grand jury refused to pursue charges against Officer Darren Wilson in the destruction of Michael Brown---a young Black man who would be a sophomore in college were he alive today---just six miles from my childhood home in Florissant, MO. That night as they slept, I apologized to my sons, in advance, for not being able to protect them.

I remember the day I took off of work when Sandra Bland's body was found lifeless in a Texas jail, days after she arrived in town expecting a new job at a local university, only to find a cop, his white feelings, and his institutional power over her. I can't fully explain why Sandra's destruction hit me as hard as it did. But it did. It did. It hurt in a way that took at least a year from my body, as all of her years lay splayed out on that jail cell floor.

Having experienced all of this and more in my life, and having learned what I've learned over the past three years of digging and reading, I could only agree with my fellow guest that no, I see no hope in the future. Hope is is a privilege that has rarely been afforded to people of my skin tone and hair texture in this exceptional country. The racism and white supremacy at work in our world today are the same as they were in 1955, 1901, 1878, 1790 and so on through the history of this country.

If I do not have hope, then why do I press on? Until a few months ago, I had only a sense of the answer, but no articulation. But having finished Coates' book, I have found a way to understand why I press onward. Rather than hope, I embrace the struggle.

The struggle is as old as this country, and began when the first Black slave set foot on this continent under the lash of a white master. It goes back to people like Frederick Douglas stealing their bodies from their masters and escaping North. It's Charles Ball fighting to reunite his family, when the Black family was not a recognized institution. It's Ida B. Wells-Barnett pushing for anti-lynching legislation as white legislators turned unhearing ears. It's Claudette Colvin kicking and fighting as the police dragged her off of a Montgomery bus. It's Mrs. Rosa Parks fighting against extrajudicial police killings in the dark ages of the 1940's, and fighting against housing discrimination in Detroit in the dark ages of the 1970's.
These individuals and millions of others fought against white supremacy, often with no hope in sight, no resolution in their lifetimes. As a Black American, fighting against white supremacy is my heritage, just as plunder is my country's.

As Coates writes, struggle is:

...a particular, specific enslaved woman, whose mind is active as your own, whose range of feeling is as vast as your own; who prefers the way the light falls in one particular spot in the woods, who enjoys fishing where the water eddies in a nearby stream, who loves her mother in her own complicated way, thinks her sister talks too loud, has a favorite cousin, a favorite season, who excels at dressmaking and knows, inside herself, that she is as intelligent and capable as anyone. “Slavery” is this same freedom and inscribes this love in its essential texts, a world in which these same professors hold this woman a slave, hold her mother a slave, her father a slave, her daughter a slave, and when this woman peers back into the generations all she sees is the enslaved. She can hope for more. She can imagine a future for her grandchildren. But when she dies, the world—which is really the only world she can ever know—ends. For this woman, enslavement is not a parable. It is damnation. It is the never-ending night. And the length of that night is most of our history. Never forget that we were enslaved in this country longer than we have been free. Never forget that for 250 years black people were born into chains—whole generations followed by more generations who knew nothing but chains.

You must struggle to truly remember this past in all its nuance, error and humanity.

It is my job, my lot, my calling to remember this past and to keep the flame burning for future generations. I must struggle, even when I see no hope. To fail to struggle is to give in and give up; it is akin to death. Make no mistake, this is a viable path that many have taken. I see it in the faces and actions of Ben Carson, Bill Cosby, and Clarence Thomas. The deaths of these living Black men have brought them temporary wealth and fame, but it has also wreaked havoc on the communities they betrayed. I want none of it.

No, I will not die. Not like that. I will struggle. And in so doing, I will live.