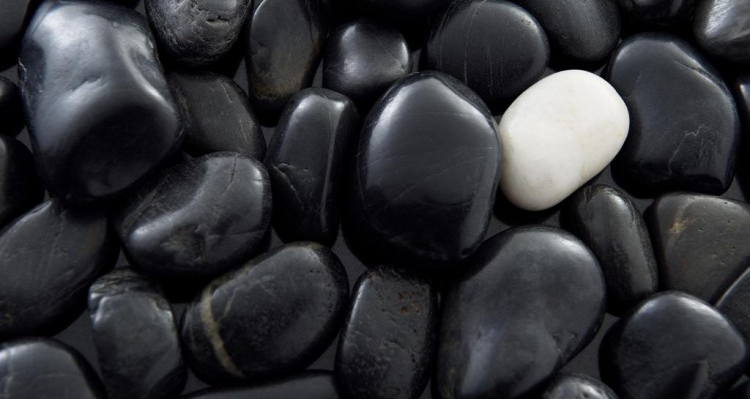 I've felt simultaneously heartened and saddened by the recent introduction of the word "privilege" into the lexicon of astronomy diversity discussions. I'm heartened because awareness about one's privilege is a vital step in actually doing something about inequality in astronomy and the world in general. On the other hand, I'm saddened by the most common reaction from privileged individuals, namely a short period of feeling disoriented, confused and/or guilty, followed by a shrug and a return to business as usual (Well, that sucks, but what can be done?). With the use of the word followed by those shrugs, I fear that the word "privilege" is slowly losing power because people aren't changing. I feel the word already slipping into the realm of buzzwords. This would be tragic, because privilege is one of the primary manifestations of racism (and sexism, and heterosexism, and ablism) in our society today.

By saddened I don't mean to imply any sort of surprise. Far from it. Indeed, being able to think about privilege for some period time and then put it aside while moving on with one's life is a privilege in and of itself, and extremely valuable one at that. If you can do this, then you can devote extra CPU cycles to your work without having to process strange race/gender-related interactions, microaggressions and entire power structures (no background process called WTF_was_that_racist). You can just be an average astronomer doing what average astronomers do. 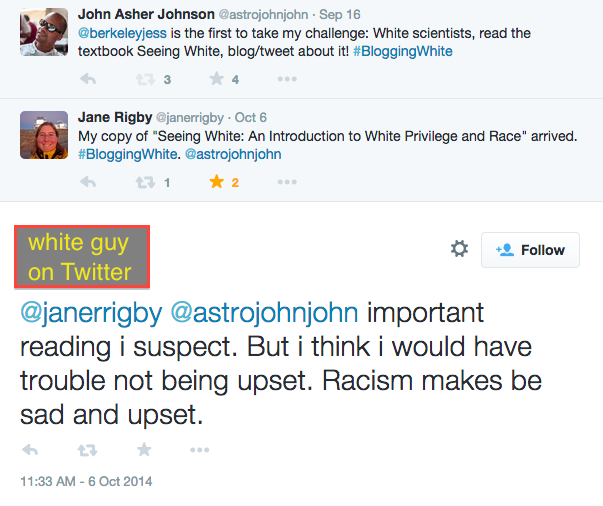 Yeah, dude. Racism makes me sad and upset, too. It also directly impacts my life and the lives of people who look like me. It causes me to worry about my Black sons and their futures. I can't unknow what I know about their relatively limited set of options in life, despite their economic starting advantage thanks to my sweet professor job. Our society will always see me and my sons as Black males first, and people second, if at all. And because of the way media portrays us, and society has always looked upon us, we are a threat to white people, especially whenever more than a few of us gather in one place.

But unlike the tweep above, I and other Black people can't just turn away in disgust after reading about an incident of racism, or viewing the stats on e.g. the wealth gap. We can't just set it down, and pick it up later when it's time to be an ally. And if we should try to ignore racism, it's to our detriment because the consequences of forgetting your non-white race can be dire (to white guy's credit, he did eventually pledge to read the book. But if he doesn't, there will be no meaningful consequence resulting from his continued ignorance. Meanwhile, if my son doesn't know about famous white people and whitewashed history in general, he gets bad grades in school).

Also, when you have privilege it's extremely hard to see it and its consequences for others. This is the basic premise behind the title and thesis of the book Seeing White, which I've challenged white astronomers to read (#TweetingWhite). Namely, whiteness is hugely important yet completely invisible to most white people (see also Understanding White Privilege, White Like Me, and especially for white feminists Ain't I A Woman: Black Women and Feminism by bell hooks). However, the theory of epistemic privilege (or standpoint theory in feminist scholarship) posits that those who are oppressed see the rules and structures of their oppression most clearly, while those who are the oppressors are generally ignorant (here's a good post on this idea, or see quotes of white slave owners talking about how happy their slaves are. Blech.).

This is because as normative members of society it is easy and very desirable for white people to be seen as individuals rather than members of a distinct racial group. "I got here because of my hard work" is a more desirable claim than "I got here thanks to help from my fellow white people and policies established by past white power structures designed to benefit people who look like me." Minorities on the other hand are frequently and without hesitation referred to as...well, "minorities." That we belong to a distinct class in society is rarely overlooked, nor should it be! But the flip side is that white people need to recognize that they, too, have a group in this country, even if that group is often simply called "Americans."

(Aside: I don't like the use of "underprivileged minorities" because the logical counterpart "overprivileged majorities" is not used in equal proportion. If people like me have less privilege than we should, it only follows that white people have more than they should. But by focusing on the underprivileged, the overprivileged get to pat themselves on the back for reaching down to help those poor black and brown people. To help the underprivileged, I'm strongly motivated to help overprivileged people come to terms with their white identities. Hence, this post. h/t Chanda Prescod-Weinstein for this revelation, and many others over the past year.)

What does it mean to see whiteness? What is privilege, why does it matter and what can be done about it? These questions all get at the root of racism in our community. Increasing the number of people of color participating in astronomy depends less on getting Black and brown high-schoolers and undergrads involved in astronomy research. Rather, it depends vitally on white astronomers coming to terms with their whiteness, and the lack of color in the power structures of astronomy and academia. If not, then we'll just repeat the same patterns seen over the past 50 years. Despite the passage of the Civil Rights Act 50 years ago, our field of science will remain one of the most segregated corners of American society as white people forget who they are and how their whiteness affects minorities around them (fun fact: US astronomy is >90% white). I seriously doubt that this is what most people in astronomy would want for their field. But this is our reality.
Want to help? Here are some suggestions
If any or all of this sounds too hard (I don't have time to read books. It's job application/proposal season.), just remember one thing: It's hard to be non-white in America. It's hard every damn day, and the associated difficulties cannot just be set aside by non-white people while they try to do astronomy. So please share the burden by forgoing that marathon session of House of Cards, or some other Washington DC-based web series with a white-dominated cast.

Thank you for this.

This book and your call to colleagues to read this text feels like a Big Read project.
I think we (collective we - scientists in general and especially those active online) should read this and push to have a real and wide conversation on this.
Would you be game?
November 10, 2014 at 10:46 AM

Therese Jones said…
Former Berkeley grad student here, who is now living in LA. I've really appreciated all of your posts here and on the Diversity in Astronomy and Physics Group, and have decided it's past time for me to become actively involved in anti-racism efforts. Any recommendations on anti-racism groups in the LA area from your time at Caltech? The anti-racist action group seems to be dead (at least given the links), and all I've found is an anti-racism group for white people in LA. Thanks!
November 26, 2014 at 1:02 PM

By John Johnson October 09, 2015
Hiding in Plain Sight ESPN has a series of sports documentaries called 30 For 30. One of my favorites is called Broke  which is about how professional athletes often make tens of millions of dollars in their careers yet retire with nothing. One of the major "leaks" turns out to be con artists, who lure athletes into elaborate real estate schemes or business ventures. This naturally raises the question: In a tightly-knit social structure that is a sports team, how can con artists operate so effectively and extensively? The answer is quite simple: very few people taken in by con artists ever tell anyone what happened. Thus, con artists can operate out in the open with little fear of consequences because they are shielded by the collective silence of their victims. I can empathize with this. I've lost money in two different con schemes. One was when I was in college, and I received a phone call that I had won an all-expenses-paid trip to the Bahamas. All I needed to d
8 comments
Read more

By John Johnson June 13, 2011
Dallas Mavericks point guard J.J. Barea standing between two very tall people (from: Picassa user photoasisphoto ). Congrats to the Dallas Mavericks, who beat the Miami Heat tonight in game six to win the NBA championship. Okay, with that out of the way, just how tall is the busy-footed Maverick point guard J.J. Barea? He's listed as 6-foot on NBA.com, but no one, not even the sports casters, believes that he can possibly be that tall. He looks like a super-fast Hobbit out there. But could that just be relative scaling, with him standing next to a bunch of extremely tall people? People on Yahoo! Answers think so ---I know because I've been Google searching "J.J. Barea Height" for the past 15 minutes. So I decided to find a photo and settle the issue once and for all. I started by downloading a stock photo of J.J. from NBA.com, which I then loaded into OpenOffice Draw: I then used the basketball as my metric. Wikipedia states that an NBA basketball is 29.5 in
2 comments
Read more

By erinjohn January 30, 2008
me: "owen, come here. it's time to get a new diaper" him, sprinting down the hall with no pants on: "forget about it!" he's quoting benny the rabbit, a short-lived sesame street character who happens to be in his favorite "count with me" video. i'm turning my head, trying not to let him see me laugh, because his use and tone with the phrase are so spot-on.
5 comments
Read more